Our cat Frank was with us for 11 years and gave us a lot of joy.  He became ill and about a year or so ago, we had to put him down.  Many will miss him.  He made friends with all of the neighbors. One day when Mike was out walking the dog and our three cats up the block, a neighbor came out and asked “Is that your cat?”  Mike said “yes, this is our cat Frank.”  The man said “Well I want you to know, he is kind of our cat too.  My daughter loves him and has been taking photos of him.”  The pictures you see below are from his many “photo shoots” at the neighbors.  Later he ran from their house with this bandanna on and the neighbors were concerned that he would show up at our home with strange attire. He was also fond of sleeping in pot holes in the middle of the street in front of our house until cars came and no doubt used up many of his nine lives with this habit.

After Frank’s passing, Mike wrote a piece called Frank’s Fine Day” inspired by Frank and his days in the sun, and it will be featured on Mike’s upcoming CD “Fantasy”.  However, we gave a pre-release recording of this piece to our friend, David Nevue, of Whispering’s Solo Piano Radio.  He has been airing the piece on his radio station for awhile now.  We recently received a very heartfelt letter from a woman who heard the song being aired.  She is a pianist and is fighting cancer.  She said that this song was helping her to heal and and to please, please publish the sheet music so she could play it.  So we did!  To hear the song and/or buy the sheet music please go to our store. Thank you Frank.  See you again someday. 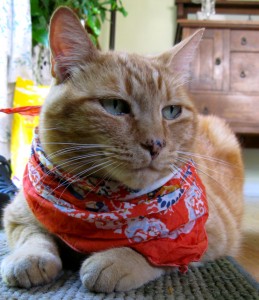 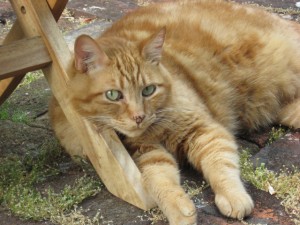